To have systems that make best practices for waste reduction, reuse, recycle, and disposal the northern Michigan way of life.

To provide opportunities and education for employees, residents, businesses, and neighboring communities to reduce waste, reuse, recycle and properly dispose of materials in order to preserve the natural beauty of our northern Michigan community. 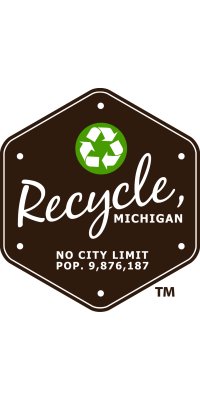 We are often approached by officials and citizens of communities which are starting or expanding recycling programs. Here’s the behind the scenes story of who we are, how our programs came to be, how they’re administered and funded, and where we are today.

Emmet County’s Department of Public Works (DPW) was established in the late 1970s and has owned and operated a solid waste transfer station since 1978. The department’s first full-time director, Elisa L. Seltzer, was hired in 1990. She was charged with implementing the County’s 1988 Solid Waste Management Plan Update which called for establishment of County recycling and household hazardous waste programs. Using the County's state-mandated Solid Waste Plan as a road map, Seltzer and the DPW Board started with three steps: 1) a funding committee was established, 2) a solid waste ordinance was drafted, and 3) intergovernmental agreements were signed with participating townships and municipalities.

The Emmet County Solid Waste Ordinance (at bottom of page) requires waste haulers to be licensed by the county. In being licensed, the haulers contractually agree to comply with the Ordinance.

A key provision of the Ordinance--a "flow control" provision--requires that waste haulers use the County Transfer Station. This serves to preserve competition by leveling the disposal cost “playing field” for the various waste haulers – local, regional, national, and multinational companies; those who earn thousands and those who earn billions; those who own landfills and those who do not. It also helps provide stable funding for the County’s Recycling and Household Hazardous Waste programs. See “Funding,” below.

The ordinance also contains a “Pay-As-You-Throw” provision (PAYT) specifying that waste disposal fees must be based on volume (i.e. per bag, cart, or yard) rather than at a flat rate (i.e. a flat monthly rate covering any amount set out). Under PAYT each household or business takes responsibility for the amount of waste they generate: if they generate less garbage they save money, if they generate more garbage they pay proportionately more. The United States Environmental Protection Agency recommends Pay-As-You-Throw as the best mechanism to reduce municipal solid waste.

US Supreme Court Ruling on Our Flow-Control-Based Funding Mechanism
Why haven't you heard about more communities using such non-tax funding systems to provide sustainable materials management services? Because such systems rely on requiring that all waste haulers use particular publicly-owned landfills or waste transfer stations. The solid waste industry long objected to such requirements, called "flow control provisions," and threatened to take communities to court if the provisions were enforced.
However, in 2007, the United States Supreme Court ruled that local control of the flow of waste is not only constitutional, but to be encouraged.
This landmark case upheld and stated the following: * "For ninety years, it has been settled law that garbage collection and disposal is a core function of local government in the United States." * "Congress itself has recognized local government's vital role in waste management, making clear that 'collection and disposal of solid wastes should continue to be primarily the function of State, regional, and local agencies.'" * Flow control ordinances, "enable the Counties to pursue particular policies with respect to waste handling and treatment, while allocating the costs of these policies on citizens and businesses according to the volume of waste they generate."
Chief Justice Roberts, representing the majority opinion, also stated: Solid waste flow control, "...ordinances are more than financing tools. They increase recycling in at least two ways, conferring significant health and environmental benefits upon the citizens of the Counties. First, they create enhanced incentives for recycling and proper disposal of other kinds of waste. ...the Counties accept recyclables and many forms of hazardous waste for free, effectively encouraging their citizens to sort their own trash. Second, by requiring all waste to be deposited at Authority facilities, the Counties have markedly increased their ability to enforce recycling laws. If the haulers could take waste to any disposal site, achieving an equal level of enforcement would be much more costly, if not impossible."
Now communities can use flow control with confidence. If you'd like to learn more about the Supreme Court decision, visit http://www.supremecourtus.gov/opinions/06pdf/D5-1345.pdf. The case is entitled, "United Haulers Association, Inc. Et Al v. Oneida-Herkimer Solid Waste Authority." 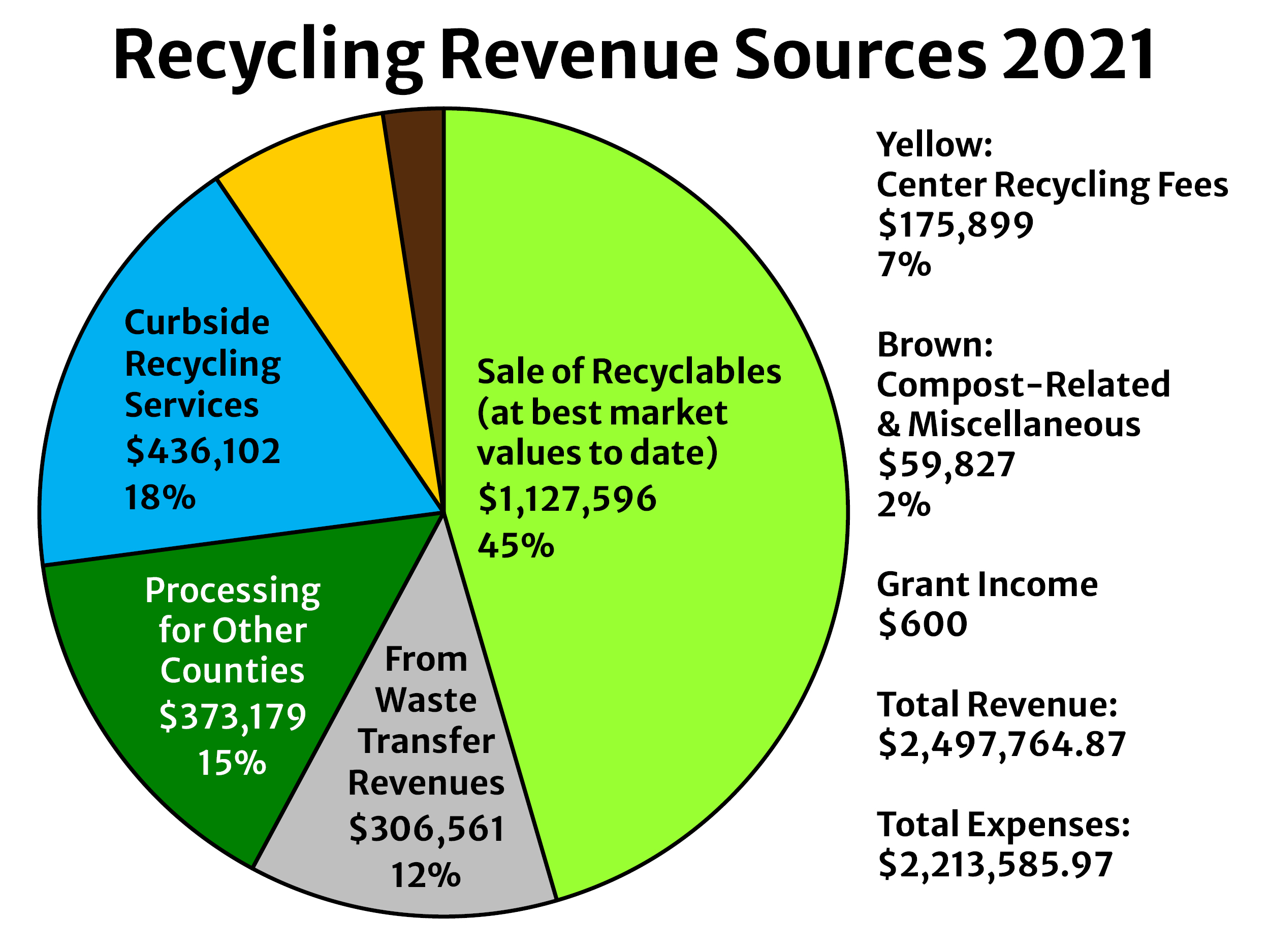 Emmet County Recycling (ECR) was initially equipped under a millage collecting .25 mils for 2 years. This provided for a truck, drop-off containers, and processing equipment. State grants assisted in funding initial construction and equipment.

Under the mechanism set up by the Funding Committee in 1991, the Recycling Program’s main sources of income are sale of recyclables and allocation of funds from Transfer Station revenues. (Of note is the fact that County’s Transfer Station rates are nonetheless consistently among the lowest in the region.) On an ongoing basis, this has covered all costs to operate the county’s 13 Recycling Drop Sites and the Recycle Processing Facility (MRF). Many facilities and systems expansions have also been funded by DPW operations.

The DPW operates its own materials recovery facility, markets the recyclables collected, and receives the resulting revenues. Income from the sale of recyclables covers a substantial portion of the operating costs for recycling collection and processing. This is a great benefit for the community, providing jobs and services instead of spending money to bury these resources in a landfill.

From 1992-1999 Emmet County Recycling received no tax dollars. We still do not rely on funds from Emmet County tax dollars. The local government entities to which we provide services do pay us from their tax dollars. Specifically, neighboring Cheboygan and Otsego counties have millages or fees to fund recycling for their citizens and they pay Emmet County to process their recyclables. ECR also has contracts with six municipalities to provide curbside collection of recyclables for their residents (60% of the County’s total households). The curbside communities have all paid for the service from their general funds without raising taxes.

In contrast, the DPW contracts with private sector companies to provide services where multiple viable vendors make competitive bids possible, for example for hauling and disposal of waste from the Transfer Station. Contract language features built-in incentives to protect and promote the program’s interests and vision and also emphasizes public ownership and control. Waste hauling from Emmet County homes and businesses is provided entirely by private waste haulers contracting directly with the customers.

Contract employees and the sheltered workshop crew became unavailable as the labor shortage worsened around 2018. The community corrections and jail volunteers have been held back since the beginning of the COVID19 outbreak. 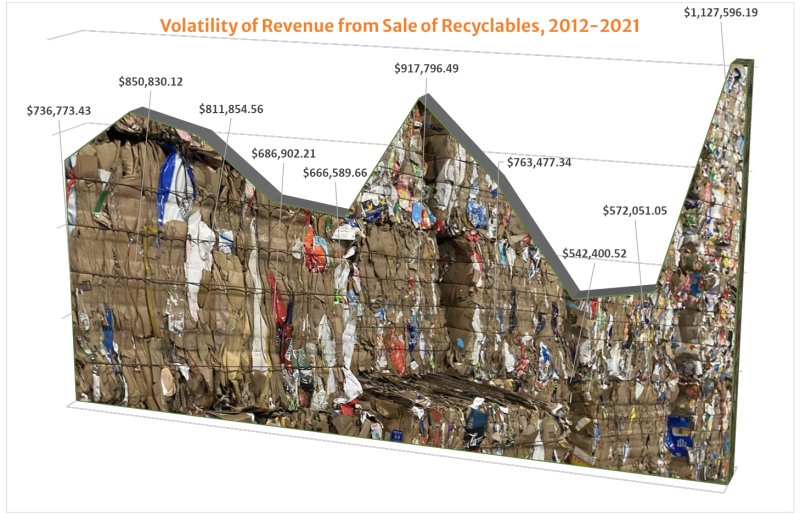